The copper-gold ratio is starting to play the game of stagflation: chart to watch

The copper/gold ratio, a crucial market barometer for tracking the stages of the economic cycle, is starting to show unequivocally the first symptoms of economic stagflation.

And we may be at the start of a major new trend.

Stagflation refers to a slowdown in economic growth due to persistent inflationary pressures, such as those seen in the 1970s and which today threaten the global economy, as discussed here.

What does the copper-gold ratio tell us now?

Copper is a cyclical metal with several industrial applications, which tends to appreciate in times of economic boom. In contrast, gold is considered a classic safe-haven asset during periods of sluggish economic growth and rising inflation.

The copper-to-gold ratio is closely tied to U.S. business confidence, as gauged by the ISM manufacturing index, a thermometer of economic activity in the manufacturing sector and a leading indicator of health. of the US economy as a whole.

The relative strength of the brown metal against the yellow metal, which involves a long copper/short gold strategy, has fallen 15% since early June and is trading at the lowest since February 2021.

The latest ISM manufacturing data for May still showed an expansion in manufacturing activity (56.1), but today’s S&P Global Flash US Manufacturing PMI data for June already showed a significant decline to 52. against 57.

In the event that manufacturing activity in the United States continues to slow, there could be a possibility for the copper-gold ratio to decline much further from here.

How do you feel about Copper?

Vote to see the sentiment of traders! 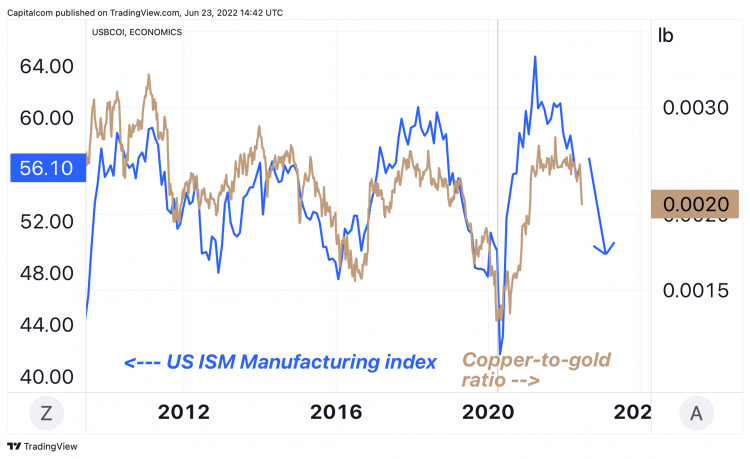 Copper prices fell to new 52-week lows, falling below the $4 support level they have held since April 2021.

The weekly chart clearly reveals the breakdown of key support, with prices set to post their third consecutive week of declines.

The Relative Strength Indicator (RSI) is moving dangerously lower and approaching oversold territory, for the first time since March 2020.

The Fibonacci retracement analysis shows the crucial new support at $3.5, which is 50% of the retracement level (March 2022 highs from March 2020 lows). If copper prices were to fall below the 50% Fibonacci barrier, they would have fallen 30% from their highs, validating the bear market thesis. 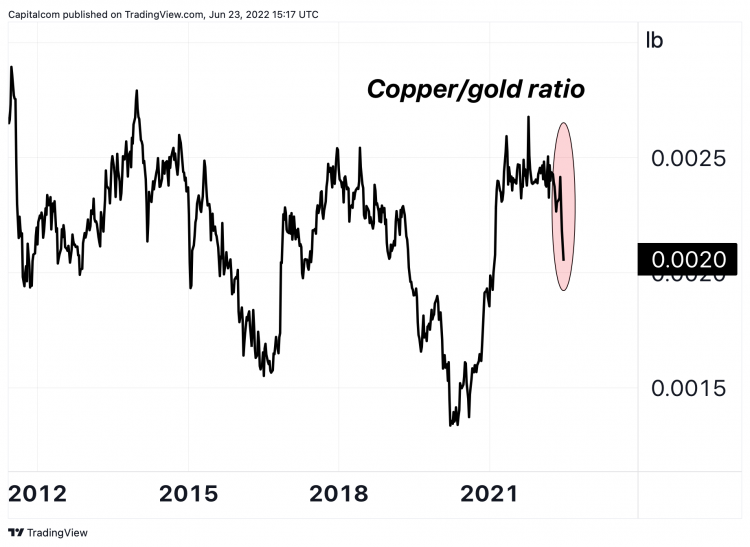